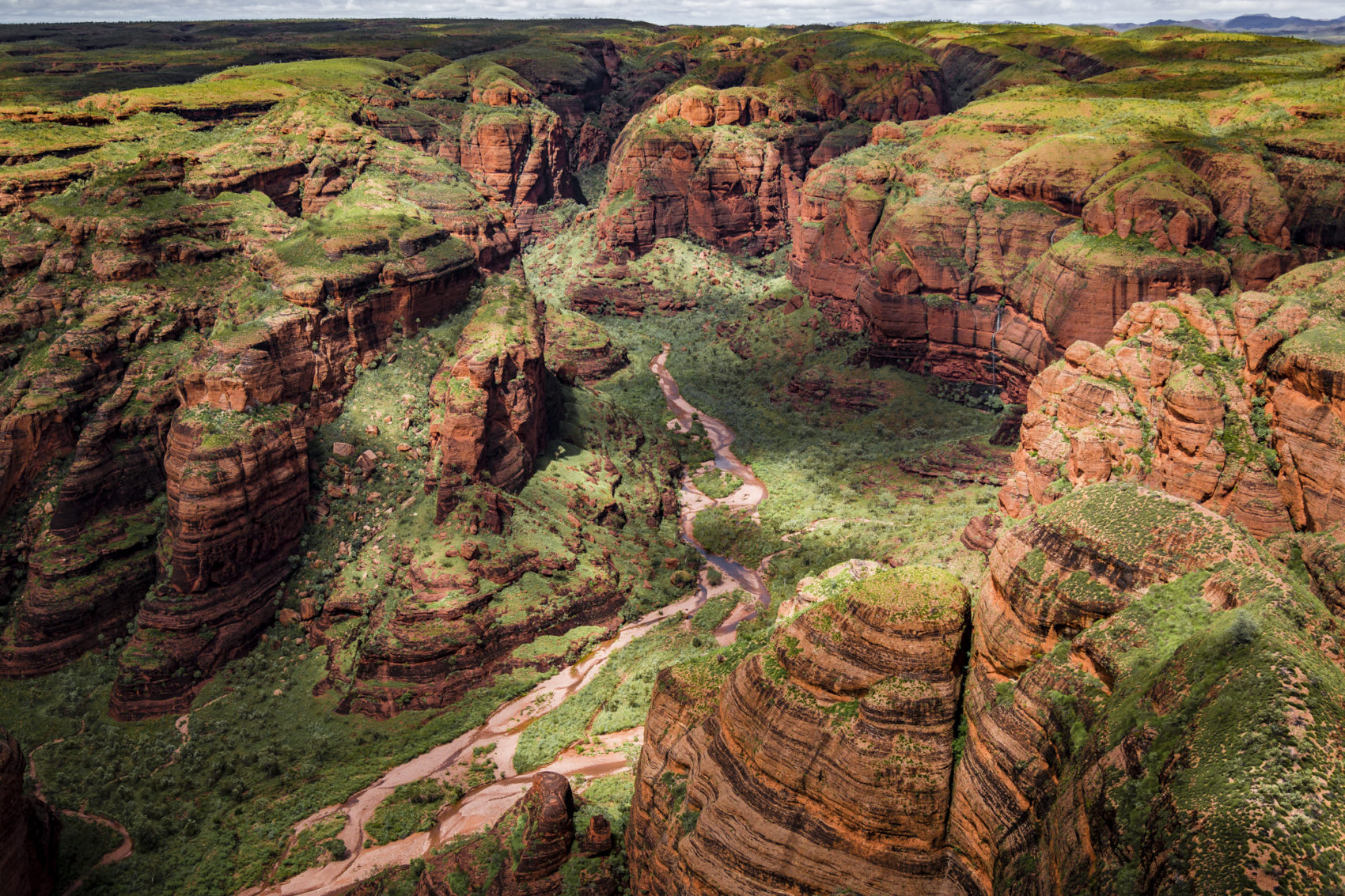 It had been a dream of mine to visit Purnululu National Park smack bang in the middle of waterfall season. The rain in the Kimberley region kicks off heavily usually from December to March/April, when the monsoonal troughs move through the top end, sometimes along with cyclonic weather activity.

I had spent hours trawling the internet and talking to different people to see if anyone had seen the Cathedral Gorge waterfall flow – with no luck. Then one day I came across a website of a remote bushwalking tour group, which featured images from a hike within the Bungles during wet season.

I was clicking through the photos with anticipation when… victory! There it was, a photo of people swimming in the Cathedral Gorge pool with the waterfall in flow. The image may have been small, it may have been pixelated, however this didn’t stop me looking back at it each day dreaming of what it would be like. I had evidence; it was real!

A few days earlier I had been chatting with someone about this and said that I envisaged the perfect weather conditions to be as follows:

You wouldn’t believe it, that is exactly what happened. I was sure Mother Nature had been listening in on my conversations.

I had been checking the BoM radar every few hours throughout the night, a large area of very heavy rain hovered over Purnululu all night, when usually storms of that type slowly move past. In the early hours of the morning it dissipated and by mid-morning, yep you’ve guessed it, sunshine and blue sky.

Next I was off to the HeliSpirit base in Kununurra to board a helicopter to see what we would find. On the way was Revolver Falls, flowing more than I had ever seen before in any photos. The cloud of mist almost took up the whole gorge.

The Carr Boyd Ranges were abundant with waterfalls, it was almost overwhelming not knowing where to look next. Then over the Osmand Ranges with even more waterfalls, too many to comprehend. All the while the country looking exceptionally green and lush.

As we flew over the Bungle Bungle Range it was beyond incredible. The unique sandstone striped beehive domes were rich with colour, deepened from being soaked with rain. The growth was a fluorescent green, quite hard to imagine as during the dry season the spinifex and long grass is quite the opposite. One (of the many) highlights was seeing Piccaninny Creek flow, which only runs after recent heavy rain.

The pilot – Sam – was as eager as the rest of us to land in the Cathedral Gorge carpark, as he had once attempted this mission a few years earlier, only to have to turn back to Kununurra due to thick cloud cover over the Bungles.

We disembarked the helicopter and started following what was usually a path, now a flowing creek as we waded through.

As we got closer, the usually empty giant rock pools had water gushing through and quite possibly widening their size even more. We came to the final stretch of the walk when it clicked, the water we were wading through was flowing, which means it must be flowing from… somewhere. That somewhere being… Cathedral Gorge! I couldn’t believe it took me this long to put two and two together, I honestly think my head was just still spinning from everything we had flown over and walked through in the last few hours.

We turned around the final bend, and there it was.

I can’t explain this moment. I know it’s the ultimate cliché, however we could feel our jaws hit the ground. Sam and I had both visited this astonishing place countless times before in the dry season, looking up at the water mark on the top of the gorge discussing what it would be like to see it flowing, and here we were, witnessing this magic moment.

The other two passengers who were with us – from the East coast of Australia - couldn’t believe their eyes either, after reading up on the area prior to visiting – they knew this was something that was extremely rare.

Now, to take photos, or just absorb the moment? It was an impossible choice. However, I knew our time was limited as it was February and the weather can change very unexpectedly.

I moved to every corner possible, taking photos from every angle I could. At times running from spot to spot, to allow time for a swim as well. Once the photos were done, I was able to swim through the very cool and refreshing water in the Cathedral Gorge pool. I stood under the force of the waterfall and, could not stop smiling. This is easily one of the best moments of my life. I wish I could have stayed there all day, even all week.

On the flight home from Purnululu to Kununurra, we made one last stop at a pristine waterhole, somewhere amongst the Osmand Ranges.

Purnululu National Park has thousands of visitors every year, who only get to view this ancient place during the dry season. We were some of the lucky few who were able to witness this amazing moment. I will forever be in awe and reliving the day through these images.

The Kija are Jaru people are recognised and acknowledged Traditional custodians of Purnululu National Park. We are privileged to be able to visit this incredible place.

Images from this trip available to purchase as your very own landscape print. Please head to my online print store.